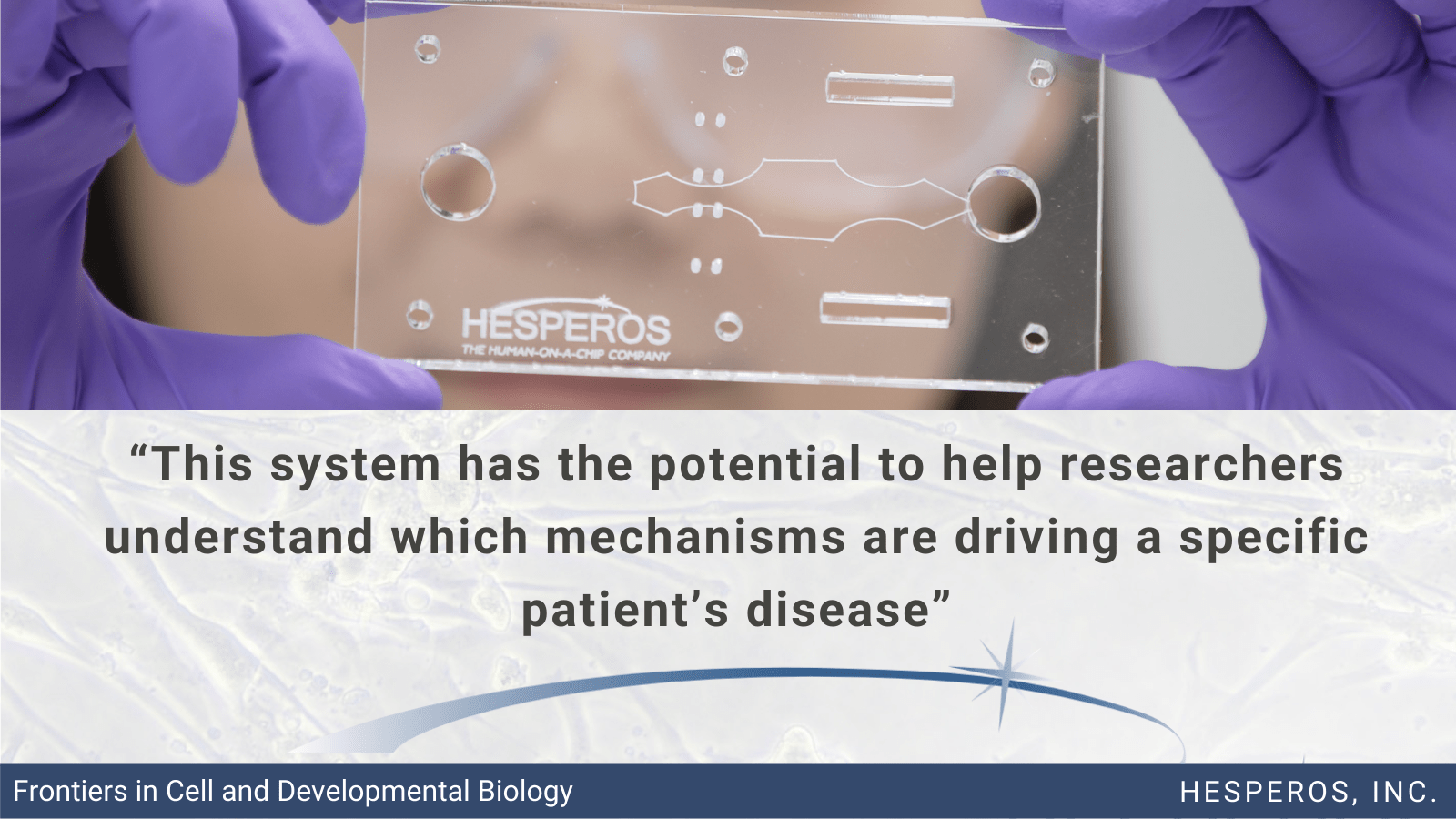 -- The serum-free system is composed of skeletal muscle and motoneurons, and recapitulates the pathological mechanisms of the neuromuscular junction dysfunction in MG --

ORLANDO, Fla. -- Hesperos Inc., pioneers of Human-on-a-Chip® in vitro systems, today announced the publication of a peer-reviewed article demonstrating that a Human-on-a-Chip® (HoaC) cell-based neuromuscular junction (NMJ) platform system can mimic the disease phenotypes of myasthenia gravis (MG). There is an unmet need for predictable preclinical models of MG since current animal models for this rare neuromuscular autoimmune disease fail to recapitulate the pathological complexities. The manuscript, titled “A Functional Human-on-a-Chip Autoimmune Disease Model of Myasthenia Gravis for Development of Therapeutics,” was published in Frontiers in Cell and Developmental Biology.

MG is a rare, chronic and progressive autoimmune disease affecting the NMJ, where antibodies are directed against essential proteins. More specifically, nicotinic acetylcholine receptors (nAChR) at the neuromuscular junction on skeletal muscle are targeted by the immune system and can lead to three possible pathogenic mechanisms: 1) receptor blocking, 2) internalization and downregulation, or 3) differential receptor binding followed by activation of the complement cascade -- a function of the immune system that aids in the defense against of pathogens and plays a role in inflammatory responses. These mechanisms impair NMJ stability and signal transduction, leading to symptoms of muscle weakness and fatigue.

Prior preclinical studies have helped uncover some aspects of the mechanisms of MG and the evaluation of potential immunotherapies. However, there is a severe lack of predictive in vivo models that accurately simulate disease pathology due to differences between human and experimental animal model immune systems as well as the high death rates among animals due to disease severeness, skewing statistical analysis.

In the Frontiers in Cell and Developmental Biology article, researchers from Hesperos and the NanoScience Technology Center at the University of Central Florida (UCF) describe an in vitro co-culture chamber HoaC system in serum-free media comprised of primary human skeletal muscle and human induced-pluripotent stem cell (iPSC)-derived motoneurons that mimic a functional NMJ. Exposure to an antibody against the nACh receptor was used to simulate the different disease phenotypes and pathology of MG.

“In this study, we used our HoaC technology to provide insights into the mechanisms behind a rare disease. In our NMJ model, we were able to reproduce the disease phenotypes similar to what has been described clinically in MG patients,” said James J. Hickman, Ph.D., Chief Scientist at Hesperos and Professor at the University of Central Florida.

“This system has the potential to help researchers understand which mechanisms are driving a specific patient’s disease, including presence of particular autoantibodies, and could be used to further evaluate targeted therapeutic interventions,” according to Michael Shuler, Ph.D., President and CEO of Hesperos.

Funding for this research was provided by the National Institutes of Health (NIH) and National Center for Advancing Translational Sciences (NCATS) of the NIH.

Hesperos, Inc. is a leader in efforts to characterize an individual’s biology with Human-on-a-Chip microfluidic systems. Founders Michael L. Shuler and James J. Hickman have been at the forefront of every major scientific discovery in this realm, from individual organ-on-a-chip constructs to fully functional, interconnected multi-organ systems. With a mission to revolutionize toxicology testing as well as efficacy evaluation for drug discovery, the company has created pumpless platforms with serum-free cellular mediums that allow multi-organ system communication and integrated computational PKPD modeling of live physiological responses utilizing functional readouts from neurons, cardiac, muscle, barrier tissues and neuromuscular junctions as well as responses from liver, pancreas and barrier tissues. More information is available at https://hesperosinc.com.