ORLANDO, Fla. -- Hesperos Inc., pioneers of Human-on-a-Chip® in vitro systems, today announced the publication of a peer-reviewed article showing that a Human-on-a-Chip® (HoaC) cell-based system recapitulates the neurophysiological characteristics of two rare autoimmune demyelinating neuropathies and demonstrate its potential use to evaluate novel therapeutics. These results support the use of in vitro, microphysiological systems (MPS) to bridge the gap between pre-clinical models and patients. The manuscript, titled “Classical Complement Pathway Inhibition in a ‘Human-on-a-Chip’ Model of Autoimmune Demyelinating Neuropathies” was published in Advanced Therapeutics.

There exist over 7,000 rare diseases worldwide but only about 400 are being actively researched due to a lack of animal models. Chronic inflammatory demyelinating polyneuropathy (CIDP) and multifocal motor neuropathy (MMN) are rare, autoimmune neuropathies characterized by muscle weakness commonly resulting in difficulty ambulating and impaired hand function. Both are characterized by immune system hyperactivity through autoantibody production leading to peripheral nerve demyelination and reduction in nerve conduction velocity. While treatment with IVIG and steroids are available to patients, there is still a significant unmet need for novel, targeted treatments, which are lacking due in part to the absence of ideal animal models and of robust preclinical models that accurately mimic human disease.

“To our knowledge, this is the first rare disease-on-a-chip model that accurately mimics the physiological characteristics of MMN and CIDP,” said James J. Hickman, Ph.D., Chief Scientist at Hesperos and Professor at the University of Central Florida. “More importantly, the efficacy data described in the study supported Sanofi’s IND filing.  This is the first IND filed using microphysiological systems data and has supported the authorization of a clinical trial (NCT04658472) that was filed late in 2020 and began recruitment in April of 2021.

“The data shows the ability to take a molecule that has existing clinical safety data and use only an MPS model to repurpose the drug and provide efficacy evidence for a different indication without the need for preclinical animal experiments,” commented Michael Shuler, Ph.D., President and CEO of Hesperos.

The FDA, including Jonathan Goldsmith, M.D., FACP, former Associate Director for Rare Diseases in the Office of New Drugs, has supported utilizing in vitro data to expand disease indications when there is a significant lack of drug development precedent. This openness to alternatives and bringing forward novel methodologies that could help transform the treatment for rare diseases were championed by Dr. Goldsmith at the 6th Workshop on Validation and Qualification of New In Vitro Tools and Models for The Pre-clinical Drug Discovery Process held at NIH in May of 2017. To that end, HoaC systems are an ideal model that can facilitate the clinically-relevant evaluation of diseased organ systems and functional activity and treatment response in rare diseases with less investment in time and capital compared to traditional approaches.

In the Advanced Therapeutics article, researchers from Hesperos, Sanofi, Duke University, and the NanoScience Technology Center at the University of Central Florida (UCF) describe an HoaC model of peripheral motoneuron conduction velocity. The system was composed of human induced pluripotent stem cell (iPSC)-derived motoneurons and human Schwann cells. Exposure to serum from MMN and CIDP patients led to increased autoantibody binding and activation of the classical complement cascade, a critical part of the immune system response. Additionally, patient-mediated serum exposure reduced conduction velocity and decreased action potential firing frequency in their functional model, recapitulating the clinical features observed in patients. The addition of TNT005, an antibody developed by Sanofi that inhibits the classical complement pathway, rescued neuronal function and restored spontaneous frequency and conduction velocity, which was supportive data used by Sanofi for their IND filing.

Funding for this research was provided by True North (now Sanofi), the National Center for Advancing Translational Sciences (NCATS) of the National Institutes of Health (NIH) (SBIR 2R44TR001326-03) and internal Hesperos development funds.

Hesperos, Inc. is a leader in efforts to characterize an individual’s biology with Human-on-a-Chip microfluidic systems. Founders Michael L. Shuler and James J. Hickman have been at the forefront of every major scientific discovery in this realm, from individual organ-on-a-chip constructs to fully functional, interconnected multi-organ systems. With a mission to revolutionize toxicology testing as well as efficacy evaluation for drug discovery, the company has created pumpless platforms with serum-free cellular mediums that allow multi-organ system communication and integrated computational PKPD modeling of live physiological responses utilizing functional readouts from neurons, cardiac, muscle, barrier tissues and neuromuscular junctions as well as responses from liver, pancreas and barrier tissues. More information is available at https://hesperosinc.com. 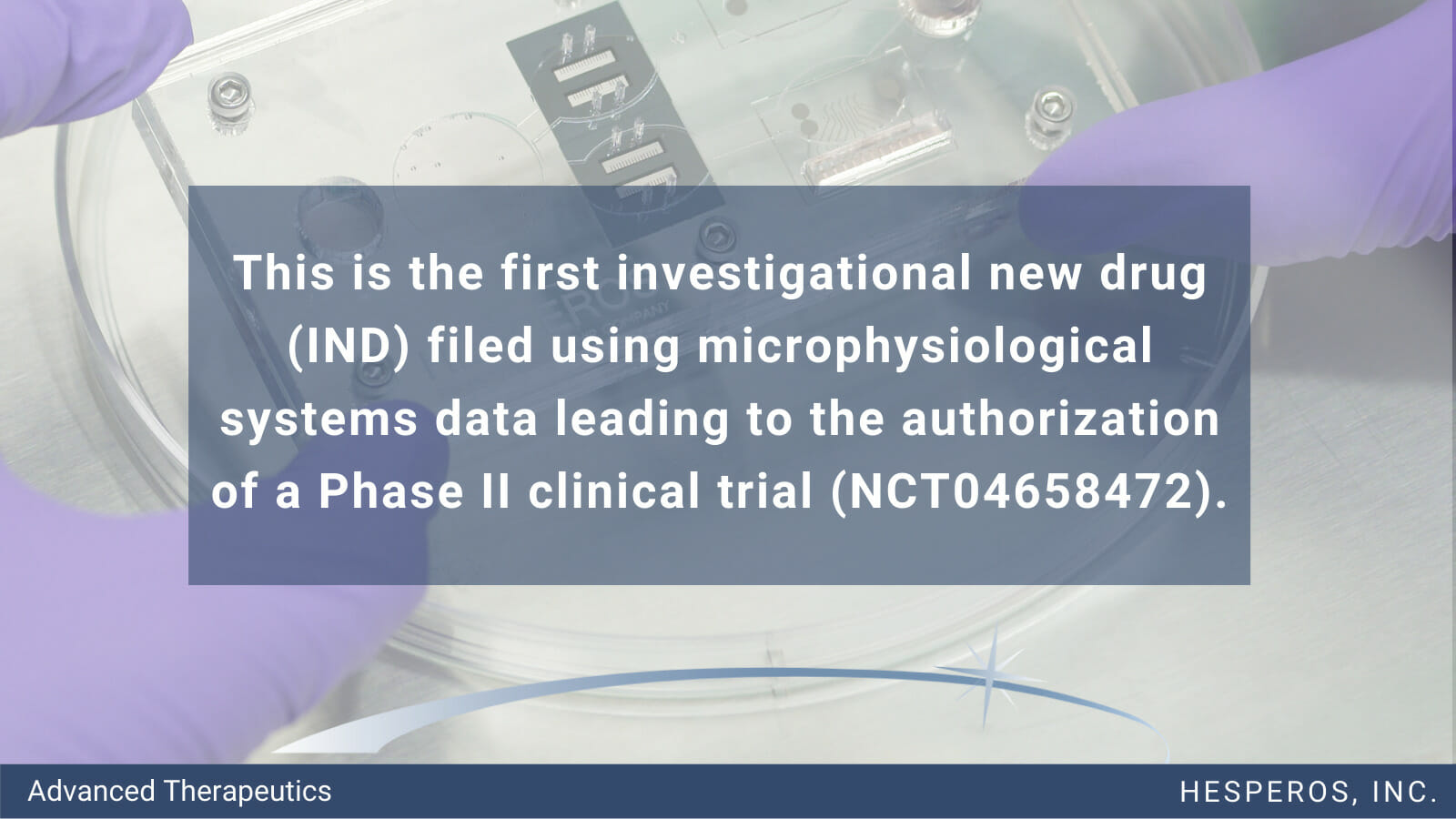