ORLANDO, Fla. -- The Hybrid Systems Lab at University of Central Florida (UCF) today announced the publication of a peer-reviewed article demonstrating that a Human-on-a-Chip® functional cell-based approach could serve as a more reliable clinically-based model of ALS and faster screening tool for novel therapies than currently used preclinical models. The manuscript, titled “A Human-Based Functional NMJ System for Personalized ALS Modeling and Drug Testing,” was published today in Advanced Therapeutics. The technology has been licensed to Hesperos, Inc., a company founded by James J. Hickman, Ph.D. and Michael L. Shuler, Ph.D.

“To our knowledge, this is the first study to demonstrate that while different ALS mutations display various phenotypes, all have the common point-of-origin deficit at the NMJ for each mutation. This is also the first data to demonstrate the efficacy of the Deanna protocol for the treatment of ALS, utilizing a clinically relevant assay system,” said James J Hickman, Ph.D., Chief Scientist at Hesperos and Professor at the University of Central Florida.

In the new Advanced Therapeutics article, researchers from UCF and Cornell University describe a functional NMJ disease model comprising motoneurons derived from induced pluripotent stem cells (iPSCs) of ALS patients and wild type primary human muscle fibers housed in a compartmentalized chambered system. Most importantly, the functional system was able to reproduce assays used in the clinic to assess ALS deficits where a patient is given a task to do with increased speed to detect spasticity or loss of muscle strength. This was reproduced by stimulating the motoneurons at increasing frequency and monitoring the muscle to record “skips” as well as accelerated fatigue.

The iPSCs were derived from three separate ALS lines, two expressing SOD1 mutations and one expressing the FUS mutation. Compared to healthy controls, each of the three cell lines of ALS motoneurons exhibited mutant-specific pathological phenotypes at varying degrees of severity, including increased axonal varicosities, reduced axon branching and elongation, and increased excitability.

When ALS motoneurons were incubated in the dual chamber system with muscle fibers, functional NMJs were formed without cell death from axons transported through tiny tunnels to the muscle chamber. However, there were significant impairments in NMJ formation, electrical activity transmission, and muscle contraction with increasing stimulation frequency. These data suggest that the system is a valid model that recapitulates the morphological and functional deficits in ALS not only for the familial form but potentially for sporadic cases as well.

The Deanna protocol is a regimen of holistic supplements that contains five components targeting various cellular mechanisms known to be pathologically altered in ALS and this over-the-counter ALS treatment is commercially available. While this strategy has been anecdotally reported to successfully treat ALS, there was previously no scientific evidence in a human functional model that support its therapeutic use.

In the study, upon treatment with the Deanna protocol the NMJ functional deficits were reversed. Specifically, treatment led to significant improvements in NMJ formation, electrical activity transmission and muscle contractions, even at higher frequencies of stimulation.

“Hesperos is looking forward to exploring how this interconnected multi-organ platform could be used to reveal additional patient-specific phenotypes in ALS and for high-content screening of drug candidates,” said Michael L. Shuler, Ph.D., Chief Executive Officer of Hesperos.

The research was supported by Department of Defense grant number AL130166 and the National Institutes of Health grant number R01-NS050452.

ALS is a fatal neurodegenerative disorder characterized by loss of the NMJ, a connection between motoneurons and muscle fiber that allows the contraction of muscle tissue and voluntary muscle movement. In ALS, also called Lou Gehrig's disease, there is a progressive loss of these NMJs followed by degeneration of motoneurons, ultimately leading to muscle weakening, loss of muscle control and eventual paralysis.

There are limited treatment options to combat the disease which only reduce progression by a few months. Therapies for ALS have been challenging to develop because current preclinical animal models do not accurately capture the heterogeneity of the disease and therefore, translate poorly in patients. 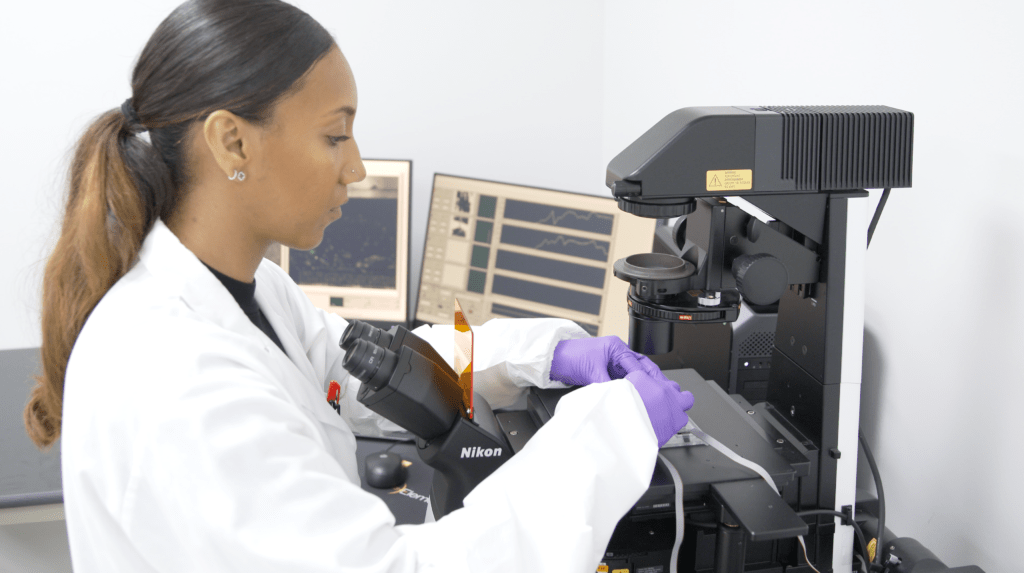 Hesperos, Inc. is a leader in efforts to characterize an individual’s biology with Human-on-a-Chip microfluidic systems. Founders Michael L. Shuler and James J. Hickman have been at the forefront of every major scientific discovery in this realm, from individual organ-on-a-chip constructs to fully functional, interconnected multi-organ systems. With a mission to revolutionize toxicology testing as well as efficacy evaluation for drug discovery, the company has created pumpless platforms with serum-free cellular mediums that allow multi-organ system communication and integrated computational PKPD modeling of live physiological responses utilizing functional readouts from neurons, cardiac, muscle, barrier tissues and neuromuscular junctions as well as responses from liver, pancreas and barrier tissues. More information is available at https://hesperosinc.com